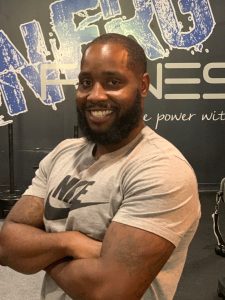 Andre Burns personal training career began right after high school in Detroit, Michigan. He began by helping co-workers, friends, and family make drastic lifestyle changes. As his knowledge and passion grew, so did his name. He became known as Dr. Dre.  He made the decision to attend Henry Ford Community College. While attending HFCC, for Health and Human Services, and earned his certification in the Fitness Leadership program. Shortly after Andre earning his certification, he joined the team at LA Fitness in Detroit. Andre quickly became well sought after within his first year.

Andre truly enjoys the challenge of helping other individuals accomplish their fitness goals & change their lives. Andre strives daily to improve work out efficiency, customer service and grow his ever expanding knowledge of nutrition and food that affect the body. In 2018,  he came to join the family business “Energy Fitness Atlanta” here in Atlanta, GA with his father Coach Matt Burns.

In his own words, “Mind over matter. Create you from the inside out!”