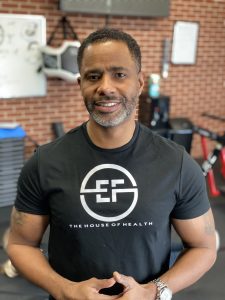 Upon his departure from the military, he attended Georgia State University to study business administration. At Georgia State, Matt combined what he learned in the classroom with his previous life experiences to formulate a vision of how he would impact the world. After graduation, Matt’s priority focused on achieving financial success. His physical well-being took a back seat as financial prosperity became the goal.

After achieving some degree of financial success, Matt realized that as a result of redirected efforts his physical self took a major hit and he found himself 65 pounds overweight. He transformed his physical build in 10 months, going from 267 pounds to 200 pounds. This experience would forever change his life and his philosophy. Shortly after his physical resurgence, a world of opportunities opened up.

These opportunities allowed him to share his knowledge, leadership, and expertise in the area of physical fitness with the world. Matt is a certified Kinesiologist. He has obtained his National Certification Career Association (NCCA) accredited personal training certification from the American Council on Exercise (ACE). He has received additional accreditation from the National Academy of Sports Medicine (NASM) and has logged well over 45,000+ personal training and group session hours.

With over 15 years of experience, Matt has reached the masses. He has had an impact on the lives of professional athletes trying to maintain their athletic build and also baby boomers recovering from hip replacement and various other procedures. The impact that Matt has made in the lives of others has inspired his continual life change and the evolution of his views in the area physical health and maintenance. Matt would like his current and future clients to know that their goals are his goals. Matt believes that “without a doubt, your health is your wealth”.

Matt’s approach to physical training and guidance allows his clients to realize that they have the ability to live a healthy lifestyle by making a few incremental adjustments. In most instances, people change for one of two reasons, “inspiration” or “desperation”.  He adds, “Our health doesn’t get better by chance; it gets better by changing.”

Allow Matt Burns, Master Certified Trainer, to be your change agent. As a leader in the fitness industry, Matt has the opportunity to mentor other trainers to achieve their career goals. He also coaches youth athletics, not only to channel his cause to promote a healthy way of life to parents and children, but also as a way to use his influence to promote positive character, spiritual awareness, and a solid work ethic.